As you head south from Denver, Pikes Peak looms down the freeway visible for miles through your front car window. In the 1940s and 1950s, the Colorado Department of Highways installed several large wood highway markers along US Route 85/87 informing you of the fact and providing a history of America's most celebrated peak. One of these highway markers near Colorado Springs was captured in a color postcard made by Thomas Dexter Press in the 1950s.

It was a good and lasting thing this postcard was created and captured the historical marker. Because this marker and like markers on Pikes Peak have disappeared. In the 1950s Colorado began transforming US Route 85/87 into freeways as part of the United States Interstate Highway System. This marker survived the first freeway improvements in this area that were completed in the 1960s and became an anchor for a scenic overlook. The overlook remained for several decades and was even augmented in the late 1980s when it commemorated Jasper D. Ackerman. This stop on the freeway became known as the Ackerman Overlook.

With age comes decay, and after more than 40 years this marker was removed in the early 2000s. Because the marker did not meet the then marker style for the Colorado Department of Transportation or the State Historical Society, it was not replaced. The Ackerman Overlook did not survive the second set of freeway improvements when the freeway was widened with more travel lanes. The Ackerman Overlook was moved in 2015 just 1/3 mile to the north on the freeway and now has interpretive signs on the United States Air Force Academy. But it has no historical markers on Pikes Peak, which still rises to the southwest of the scenic overlook.

This mountain, 14,110 feet above the sea and the most celebrated peak in America, is named for the explorer, Capt. Zebulon M. Pike, who saw it first in 1806. He attempted to climb it, failed and reported it unclimbable. Ascended in 1820 by Dr. Edwin James, a later explorer. A cog railway reached the summit in 1890 and a highway, in 1915. Motor races up the peak are held annually. The resort city of Colorado Springs, founded 1871, nestles at its foot where the first town called Colorado stood years earlier. The U. S. Air Force Academy rises ten miles north.
Pikes Peak is famed for its history and conspicuous position. Colorado contains more than fifty mountains over 14,000 feet high.

Posted by Unknown at 3:04 PM No comments:

Postcard Markers - The Shrine of Democracy

Mount Rushmore has not changed much over the last 70 years. The faces of George Washington, Thomas Jefferson, Abraham Lincoln, and Theodore Roosevelt and that side of the mountain look pretty much the same as they did in 1941 when the busts were completed.

But stand east of the mountain and lower your gaze down from the presidents. You will be in the midst of a multitude of changes that have been made to the landscape below the presidents over the last 60 years. You could probably write a book about all the changes the National Park Service has made: the visitor center, concessions building, amphitheater, parking garages, etc.

I want to talk only about one small area in this sea of change. The road leading to Mount Rushmore ventured closer to the presidents than it does today. In the 1940s the road led you to a viewing area beneath the busts of the presidents. The marker was installed in the 1940s and located alongside the road that led to the viewing area. The location of the marker next to a large, pronounced rock by the road is clearly shown in the postcard image.

Decades later the popularity of Mount Rushmore has grown substantially, and facilities and services for visitors have been built closer and closer to the presidents. The road leading to Mount Rushmore has been pulled back and now ends at parking garages. In its place now at this location is the Avenue of Flags, a wide walkway leading from the concessions building to the visitor center and amphitheater. However, the rock next to the marker still lies at its origin just northwest of the concessions building. The rock has changed little, if any, despite everything going on around it.

The historical marker was lost when the road was removed and was never replaced. Thanks to this postcard, however, a snapshot of the marker in 1946 will remain, providing a synopsis of The Shrine of  Democracy as it was enjoyed by auto visitors in the 1940s.

(Along the top border of the marker is the following information, from left to right)

Posted by Unknown at 8:10 PM No comments: 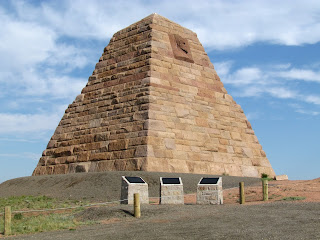 Waymark of the old State marker from waymarking.com

Information on Interpretive Panels from the Historical Markers Database

Completed in 1882 at a cost of $65,000, this monolithic, 60-foot high granite pyramid was built by the Union Pacific Railroad Company. It stands on the highest elevation (8,247 feet) of the original transcontinental route. Until 1901, when the railroad was relocated several miles to the south, it passed close by the north side of the monument where once stood the railtown of Sherman.

The monument serves as a memorial to the Ames brothers of Massachusetts. Oakes (1804-1873) and Oliver (1807-1877), whose wealth, influence, talent, and work were key factors in the construction of the first coast to coast railroad in North America. The contribution made by Oakes was especially significant, even though in 1873 he was implicated in a scandal relative to financing the construction of the railroad.

Ames Monument was designed by the distinguished American architect Henry Hobson Richardson (1838-1896). Located further west than any of his works, this memorial typifies the Richardsonian style by it energetic, elemental characteristics. His love for native construction materials is demonstrated by the monument's great, rough-hewn granite blocks, quarried from "Reed's Rock" one-half mile west. A Richardson biographer has called the monument "Perhaps the finest memorial in America...one of Richardson's least known and most perfect works." The bas-relief medallions of the Ames brothers were done by the prominent American sculptor, Augustus Saint-Gaudens.

Posted by Unknown at 8:31 PM No comments:

In 1949 the State of Mississippi started a state historical marker program that is still going strong 68 years later. The state markers were designed as your typical highway or roadside marker with a green background, a silver border, and gold lettering. A magnolia flower, the state flower of Mississippi, set in a silver oval adorns the top of the marker. The design of the state marker, which has become known as the Magnolia marker, has changed little, if any, since state historical marker program began in 1949.

There are over 1,200 Magnolia markers throughout the state. Some of these markers have been stolen, damaged, destroyed, or are simply missing. These missing markers range from those installed in 1949 to some installed just within the last decade and have not been repaired or replaced and may never be. They are now lost markers. If the 17 lost markers accounted for below do not return to their rightful place, this blog post will act as a wake to the memory of these Magnolia markers from yesteryear.

What Happened: It was reported that the marker was destroyed. It happened sometime between May 2014 and January 2016. The marker and the support post were removed.

In 1958 the State Historical Society of Missouri and the State Highway Commission installed a highway marker for Texas County on US Route 63 just south of Houston. This marker was just like the other 121 highway markers that they were installing in each county in the state. The two-sided markers provided an in-depth synopsis of the physical, historical, and cultural features of the subject. They were constructed of cast aluminum alloy with a baked enamel blue finish and gold lettering and the state seal at the top. The Texas County marker was accompanied by a lengthy turnout so locals and travelers could pull off the highway and leisurely read the encyclopedia's worth of information about Texas County as it was in 1958. It stood at this spot for decades as the town of Houston grew around it, but changes were brewing in the 1990's.

In 1995 the County Commission believed that an update was necessary and installed a new marker for Texas County at the county courthouse in Houston. Although the 1995 marker had the same design as the 1958 marker, the Commission made substantial revisions, additions, and deletions to the marker's text to reflect the new Texas County of 1995. These two markers, each providing a snapshot of the county in different eras, coexisted for several years but soon it was thought by some that the outdated needed to be brought to an end.

Historical markers occasionally show up in motion pictures and television shows, usually as an innocent bystander. Recently I was watching a movie from 1978 that I’ve seen once or twice, and although I remembered the scene from my previous viewings, I was still surprised to see the prominence of this historical marker for a brief moment in the movie.

The Boys from Brazil was not a particularly successful movie in 1978, but it was subsequently released on home video and occasionally shows up on streaming services such as Netflix. That is how I came across the movie once again. Three-fourths of the way through the movie the camera follows a car driving on the foggy roads of Lancaster County, Pennsylvania. The end of this particular camera shot was a historical marker alongside the road, and the shot held steady for a few seconds and placed the marker in full-frame. With the pause button now a way of watching movies today, I paused to read the marker:

The Wisconsin Historical Society marker for Dr. Nicholas Senn had a short life. The idea of the marker was first conceived in 1958, a marker was installed two years later, and eight years after that the marker was stolen, never to be recovered and never to be replaced. A life of only ten years. The memory of the marker occasionally surfaced when the Nicholas Senn building became a community issue, but that memory has been further buried with the demolition of the building in 2012. Now, this Wisconsin Official Historic Marker, which was similar to the many state markers you find around Wisconsin, may only be remembered when seekers of historical markers ask, “What happened to No. 96 of the Wisconsin Historical Society’s Official List of Wisconsin’s State Historic Markers?”

Speaking to the State Medical Society of Wisconsin at their annual meeting on May 5, 1958, incoming president Dr. J.W. Fons proposed a suitable marker at the Nicholas Senn building “so that all who pass by might know the works of one of our great colleagues.” The Society adopted his proposal, and almost exactly two years later on May 4, 1960, Dr. Ulrich Senn (the nephew of Dr. Nicholas Senn) unveiled a Wisconsin state historic marker at the corner of W. Juneau Avenue and N. 3rd Street in Milwaukee.[1] The marker was mounted on the Senn building on the wall facing Juneau Avenue and commemorated Nicholas Senn at the site of his office and laboratory.